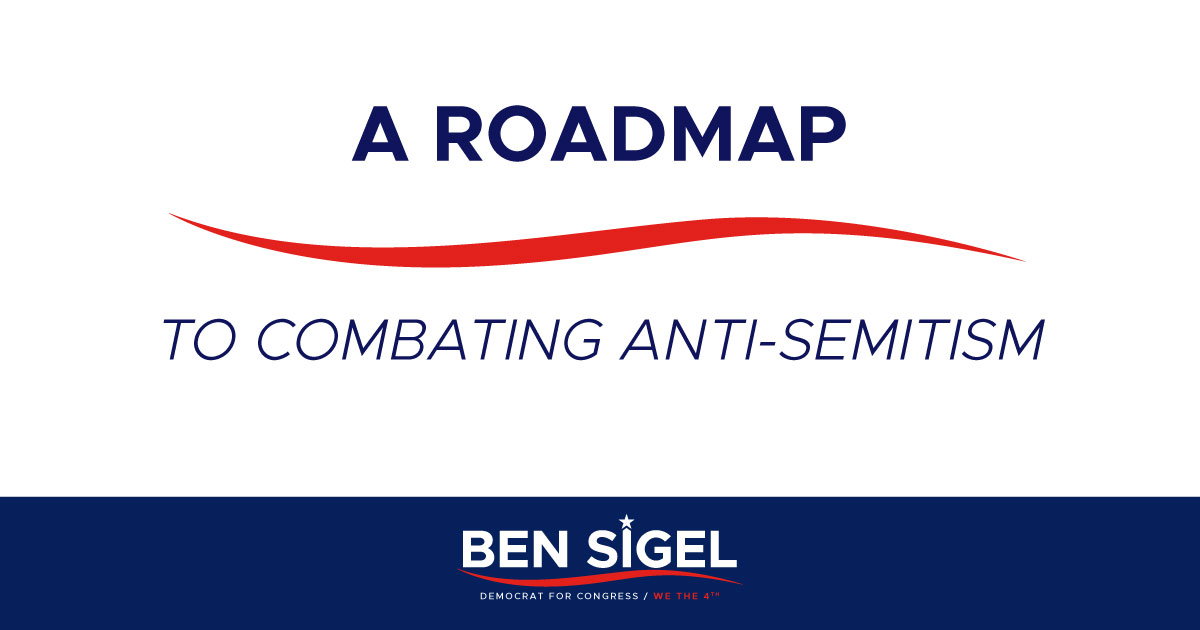 A ROADMAP FOR COMBATING ANTI-SEMITISM

We are at a pivotal moment in our country. We have seen our society stand-up, speak out and use the collective power of their voice to fight against and eliminate the systemic racism that has entrenched its insidious venom deep into the soul of our country, and which has slowly suffocated and killed members of our Black community, and other communities of color, as we discussed in our Roadmap to Eliminating Racism.

We have also seen a staggering sharp rise of hate crimes, intolerance and Anti-Semitism against the Jewish people. Our society and the very fabric on which it rests is in need of repair. This poisonous phenomenon did not happen overnight.

We are living in a time when people of many different faiths and backgrounds are afraid, are hurt and are feeling alone. In fact, earlier this year in January, just before announcing my run for Congress, and upon leaving synagogue after services on Friday night, I was called a kike by a gentleman and was told my grandmother should have never survived the Holocaust and that I should be processed.

This was not the first time I was the victim of Anti-Semitism for being Jewish or hatred for being Latino, and unfortunately, it will not be the last time. As a child growing up in the suburbs of Boston, I was told on numerous occasions to “pick up that penny you spic” and called countless derogatory terms. It was hurtful and divisive then, and it still is now.

But, I am not alone as a victim of recent Anti-Semitism. According to the Anti-Defamation League (ADL), nationally, Anti-Semitic incidents hit a record high in 2019, the highest annual tally since 1979 and a 12% increase over 2018.  Also according to the ADL, in Massachusetts, Anti-Semitic incidents increased 128% to over 114 incidents, including in the 4th Congressional District, where we witnessed 3 incidents at Wheaton College, an arson attempt at a Chabad house in Needham, desecration of a Fall River Jewish cemetery & online Anti-Semitism targeting middle and high schools. In addition, according to the AJC, 30% of American Jews avoid publicly wearing, carrying, or displaying things that might help people identify them as Jewish and 19% of American Jews avoid certain places, events, or situations out of concern for their safety or comfort as a Jew.

Enough is enough. Hate against any one group is hate against every group. We need to all stand-up and speak out together against hate with shared values of peoplehood because defeating hate in all of its forms requires all of us to do it together.

That is why I am committed to: