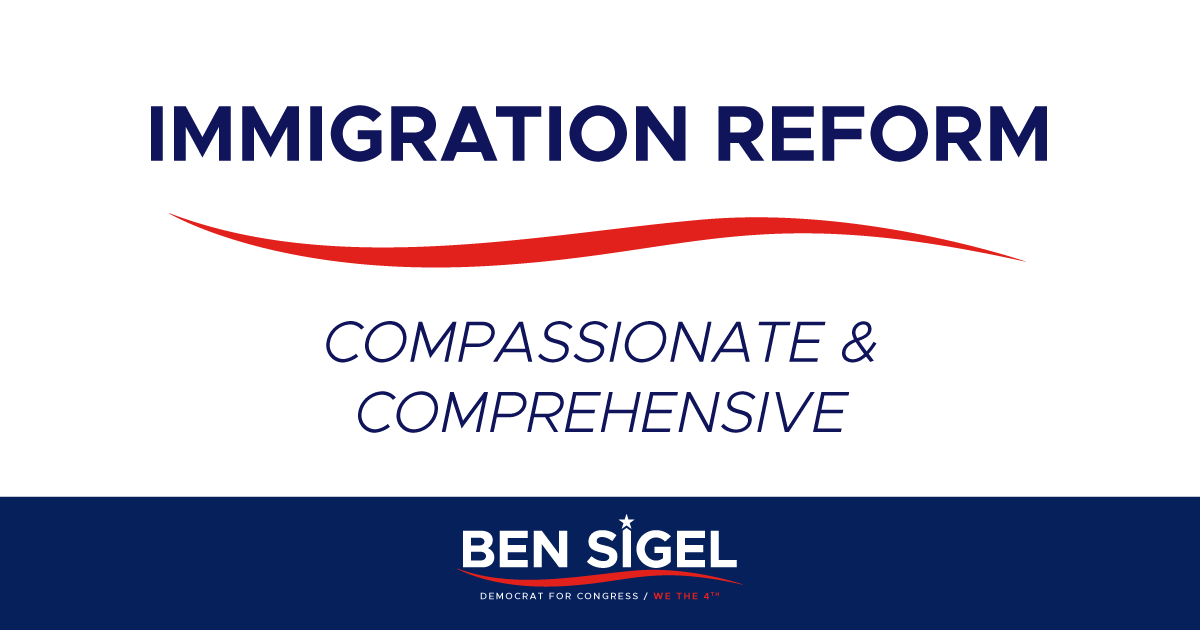 We have been, are, and will always be a nation of immigrants. Running to be elected as the first Latino Member of Congress from Massachusetts, and being the current President of the Hispanic National Bar Association for New England, protection of our immigrant community is personal to me. In addition, as a Jew, I am imbued with the historical memory of the immigrant experience that the Jewish community went through not too long ago when the United States closed its borders to Jews fleeing the Holocaust and the terror of Nazi Germany, only to be sent back to Europe by the United States, where many of them ended up being murdered by the Nazis.

The social, cultural, civic, scientific, and technological contributions of our immigrant neighbors have made our society, Commonwealth, and nation more vibrant, stronger and spurred our collective growth. According to the Massachusetts Immigrant & Refugee Advocacy Coalition (MIRA), immigrants comprise of 20% of the Massachusetts workforce and play a major part in every sector, comprising 52% of our medical and life scientists, 71% of our housekeeping employees, 44% of our chefs and cooks, 14% of our nursing, and 40% of our health aides. In addition, Massachusetts is home to over 65,000 immigrant entrepreneurs, 7,300 of whom are undocumented; they employ 169,000 people and generate over a $27.6 billion in annual sales. Further, 58% of Fortune 500 companies in Massachusetts were founded by immigrants. These are the teachers, public servants, scientists, medical professionals, entrepreneurs and valued community members who fuel our economy and enhance our cultural vitality.

But our immigration system is severely broken, particularly for undocumented immigrants. What kind of message are we sending if we are locking people up simply for seeking refuge or asylum? We need comprehensive and compassionate immigration reform that removes barriers to integration, eases transition, and expands opportunities for our immigrant neighbors. Many of our immigrant neighbors feel unwelcome, alone, and live in constant fear of being separated from their loved ones and livelihoods, and being deported to their country of origin. They feel intimidated, harassed and attacked by this Administration who uses them as scapegoats and a target for anger and hatred by the Far Right. Lies and hatred by white nationalists and the Far Right has led to a false perception of undocumented immigrants. Documented and undocumented immigrants have significantly lower rates of incarceration than native born Americans, and are more likely to be entrepreneurs and small business owners, yet they remain the targets of racist, xenophobic and false attacks that label them criminals.

Our immigrant community is also often exploited by companies for cheap labor without protections, and then lack recourse if they are the victims of crimes. While President Trump has exacerbated the immigrant crisis with his reckless and immoral policies like criminalizing unauthorized border crossing and the “Muslim Ban”, and through his demagoguery and bigotry, our broken immigration system has existed long before he took office.

No one in our country should live in fear of being intimidated, harassed, detained for going to school, reporting a crime to police, or for their loved ones disappearing at the hands of ICE with no way of knowing what happened. No child should ever be separated from their parents and kept in cages. No young adult should ever be deported back to a different country when the United States has been the only home they’ve ever known.

As your next Member of Congress, I will always stand up and speak out to support and protect our immigrant community.